Full car load of stuff just went to the local tip. Several black bags of paperwork, old casette tapes, boxes, bags, boots, magazines, etc., etc., etc. The back bedroom is looking MUCH clearer. Still full mind, but a hell of a lot better than it’s been since we moved in. There’s a serious risk of being able to see the floor in all 3 bedrooms *at the same time*.

So we’ve caught up with friends, Andy, Chris & Christine, Sarah & Michael after about 2 years. We’ve promised them it won’t be another 2! We’ve booked Maelstrom as well, so if you knew us from the Omega LRP campaign you should see us at Maelstrom in June.

We’ve spent a week or so now seeing friends, sorting Maelstrom, testing reading some stuff for David Gemmell, getting out of the house, sorting the back bedroom, picking up one or two other DIY bits and pieces and generally moving our life forward a bit, which is a little unusual. It’s meant less time in EQ than normal but I can’t think of a psychologist on the planet who would describe that as bad. We’ve probably burned ourselves out a bit on life and I should think we’ll be a bit busy in EQ for a few days catching up with those friends.

I may try and fix the clothes rail in Grete’s wardrobe tonight if I get time, have to see how I feel, generally really down at the moment, not sure of any specific cause other than my usual ‘worrying about everything related to money’ thing. 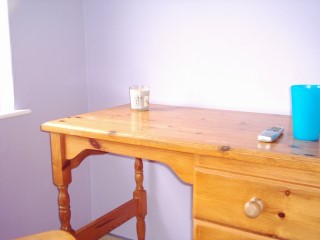 We did it, we finished a bedroom. It’s a small bedroom, my mum could decorate it in half an hour between feeding 2 kids and her job, but hey, it’s our second one. We finished the last two walls today, put another coat on the first two (hopefully we learned and put more paint on the last two) and finished the trim around the window and stuff.

We *finally* put furniture into the room after over two years of being in the house and using it as a dumping ground.

Now we can start sorting out the back bedroom and moving things around in there, since we have some space.

2 full walls painted lilac (side walls), leaving the ‘door’ wall and ‘window’ wall left to do. We had to repair some wallpaper on those walls so we didn’t do them today, and we want to paint the woodwork around the door frame (which we forgot when doing the other side of the room) so we’ll do that first.

I think we’re basically decided to try and make it to Maelstrom as well, if we can get our booking in before the deadline.

We’re moving house – our Landlady wants her house back, so we’re buying a place. Things are moving along, mortgage offer accepted, written confirmation ‘with us soon’, solicitors engaged, insurance in place. Staying in the same general area (house is within a couple of miles of our current one), nice and tidy inside. If we didn’t hate moving so much it’d be exciting 😉

The house is sold. Finally.

I just wish I remembered how to feel happy.

Sent the legal stuff back to the solicitors yesterday, so the house sale is still (once again) going forwards. If you’re a race which has fingers, please cross them for us.