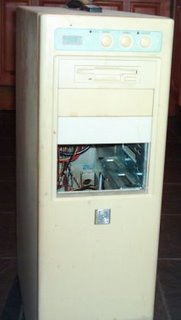 I’ve been messing with computers for a long time now, and trust me, I don’t usually get sentimental about stuff. However, sometime in the mid 90’s, I think about 94 or 95 I bought a computer case, from some guy called Simes who at the time ran a Bulletin Board called Ind3x that I used a lot. The case was something like £90. At the time, it was a damn good deal, and a 300watt power supply was unheard of in those days, but I was thinking big. It was a full tower case, with a boat load of internal bays and a good number of slots for bays for cd roms, tape drives, floppies, etc. People I knew told me I was daft, £90 for a case was just silly, even in ’95.

Over the 11 years that I’ve had the case, I’ve upgraded the contents repeatedly, there’s nothing inside it that used to be inside it, except for that power supply. I’ve always been a believer in leaving PC’s powered on, and that case has been powered on for around 99% of the time I owned in. From Stockton, to our own house in Stockton, to the flat in Nottingham, the terraced house in Nottingham and finally our own home in Nottingham. I carried it around Stockton when were doing network gaming, I carried it around Nottingham when we did the same. It weighed a rediculous amount even when empty, never mind when fully populated with cards, hard disks, tape drives, etc.

11 years of faithful service. It was my ‘second’ machine for about 3 years, fitting snugly under the desk (only just), and letting me browse the web while playing EQ, but finally, we bought new PC’s, and there’s just no room for it any more. After 11 years, the power supply fan had only just started to make disturbing noises (a gentle chuntering). I can’t say it enough, 11 years of non-stop running from a single power supply and a single fan. It did me proud. I felt it deserved a blog entry 🙂

Kudos to Packard Bell. I thought I’d check out their site to see how they advertised the machine we bought (we didn’t buy it from them). They get it right.

Which just makes me even more angry at the people we did buy it from.

The GeForce 6200 TurboCache PCI-Express cards do not have the memory on-board used in the card ‘name’. They just don’t. So I ordered two replacement cards while I try and educate the retailer. Of course, since it’s such a small market, I ordered GeForce cards even though I think this whole problem is GeForce’s at the root.

But on better news.

That’s going to have been 84 loan payments in total, and it’s nearly over. Finally. It’ll be roughly equivalent to getting a 8-10% pay increase after tax.

I’m pleased we managed to avoid adding the loan onto the mortgage when they offered us the option, I’m glad we’ve managed to hold on and not extend the loan any more, and that we’ve finally gotten to a stage where we can clear that debt.

Credit card balance is the next target … and once that’s gone, the overdraught. Getting there slowly.

… never having to give out real memory figures.

So the two new PC’s, they were a good deal, we love them, EQ is much quicker, we’re happy.

But I’m not happy about the advertising “256MB GeForce Graphics card” it said. When it really meant “GeForce 6200SE TurboCache 256MB” which translates to “GeForce 6200SE TurbCache with 64MB onboard and using another 192MB of your precious system memory over the PCIExpress slot”.

I might talk to the vendor tomorrow about their advertising, I know that they get theirs from the manufacturer, but it was their advertising which sold me the machine, and it didn’t list the TurboCache feature or explain it anywhere, just said 1GB of main memory and a 256MB Graphics Card.

So it’s bonus time at work, computer prices (without monitors) are mad and low – which means we’re sporting a couple of new ones. Been about 2 1/2 years since we had new machines and the speed of the old ones was starting to show. New P4 3GHz machines with 1GB memory and decent graphics. Not state of the art, not super quick, and not more than £430 each.

USB is an excellent technology and there’s loads of gizmo’s that you can use these days, but we particularly liked this one at work. It looks well put together rather then just hacked together in a shed, and actually might prove useable. It’s a USB Fragrance Oil Burner.

I played games on the Atari, and wrote software on the Spectrum, until eventually, the Atari fell by the wayside, and I used the Spectrum more and more (for both games and writing stuff).

I discovered BASIC very quickly, and while much of my time was spent playing games on the Speccy, I learned a massive amount about writing software using that thing. I wrote several database style programs for storing roleplaying information on (for example, all the monsters from the Basic and Expert Dungeons & Dragons rulebooks), a hugely complex slot machine game type-thing, and a bunch of other weird and wacky stuff (much of it roleplaying oriented).

On both machines, I remember a particular game which I played to death. On the Atari, it was Defender, which I remember playing for many hours without a break as I got better at it. On the Speccy, it was Bards Tale, which wasted what felt like an entire summer, mapping and writing details of the places in the game. I don’t think I ever finished it.

As school progressed, I got to play with BBC B machines, and I distinctly remember playing Grog, and listening to bad versions of Sweet Dreams by the Eurythmics. The computer was used by our school’s new fledgling Business Studies class, and I wrote a pretty basic share purchasing application which allowed you to play at being a stock broker. It wasn’t very good. I also discovered Shades on Micronet.

I was still messing with the Speccy up until 1989 when I went to University. The Speccy stayed at home. I’d been at uni, doing a Computer Studies degree for about a month or so, playing with these new fangled PC’s, when it became apparent I needed one. It wasn’t long before I got my Amstrad 1512 (with a 21MB hardcard no less), a mate purchased a 1640. And that was it, F19 Stealth Bomber and Links Golf for the rest of the first year. More software development, now using Turbo Pascal to write more roleplaying and database related applications. More messing with machine code (I’d done bits on the speccy and on the BBC B). By the end of the second year at uni (1991), I needed a better machine. I took out a special loan that Barclay’s were providing at the time, and purchased a 386, with 2MB of memory and an 80MB hard disk.

That machine warped over the following years, gaining motherboard upgrades, case replacement, memory upgrades, sound cards, modems, tape drives, hard disk, etc. I still have the floppy drive, it’s the only bit left from the original. The keyboard died in 2000. More pascal programming, the discovery of Bulletin Boards, and then finally, the discovery of the Internet, for me, sometime around 1995.

I got on-line with Demon at first, using their DOS software and quickly moving to Trumpet Winsock and Windows 3.1 based stuff. That changed, and I remember the first time I configured internet access in Windows 95, compared to getting stuff going with Trumpet Winsock it was a dream.

In parallel to that, I left Uni with a first class honours degree in Computer Studies, and got a job initially writing software, although I moved into first line support quickly afterwards, and I now work in third line support, for a different company.

The home network is getting silly. When Grete moved in, we shared a single PC. We coped. When we moved into our own house, we realised we wouldn’t cope 😉 And so we bought one for her. We networked them using thin ethernet, and used various apps to share the ‘net connection out over the two machines. Eventually the two machines got upgraded to PII 400’s. A couple of old 486’s got added to the list, and eventually a Cable Modem connection, with a linux-based firewall. Then, recently, the two PII’s got two slow, and we’re now both using P4’s of various speeds, and the home network consists currently, of around 6 machines.

Computers and me? We go back a long way. I’ve been ‘doing’ computers since I was 12. Not professionally, but I’ve been looking at a screen with text on it, and typing stuff at keyboards, and using mice (yes, I bought a mouse for my Speccy), for nearly 20 years. Every day that I have been employed, my job has been about computing, not just using them to get something done, but doing computing, a job about computers.

I’m comfortable with computers. I think we know why.

So, we were in Meadowhall doing our Christmas Shopping, and we found one of the Sony 300 CD Changers in the Sony Store. So we bought it. Even though we bought an 80GB hard disk and a CD a week ago to making ripping our CD’s easier, and then ripped all of them. So now we need to put them all into the changer and think about entering 15 character descriptions for them all! And it’s HUGE!

So we’ve looked at some 5 tray ones, but at £40 less than the 300 CD changer was going to be, we feel shortchanged.

In the meantime, because our CD player isn’t working properly, we’ve been playing MP3’s. And it’s not bad.

So, I’ve got this Linux box running Debian. PII-400 which holds together our mail, news, web stuff here. And it’s got a 40 Speed CD ROM in it, and a reasonable sound card. A plan is hatched, convert it into a CD Jukebox so that we don’t need a new cd player.

Quick check on freshmeat and I have some candidates for web-controllable jukebox software.

Got home, whacked a CD into the drive, lots of clicking but no action. So, cd drive is dead. Ack! Spend an hour convincing myself of this fact by trying lots of things, including moving the drive from slave to master, etc. Also, since it’s Linux and I can’t remember when I last played anything in the cd drive, I play with modules and configs for a bit. No joy.

Luckily I have spares, drag out a 24 speed drive, rip the linux box apart, whack in the new drive, test out some CD’s, looks fine. Bundle the thing back together, take the time to do a bit of recabling I’ve been meaning to do for ages, and stick it back onto the shelf.

Haven’t got the jukebox stuff in yet.

So, need to install that software, or choose another one, and then consider relocating the speakers and amp.

I’m knackered! Spent the day ripping PC’s apart, rebuilding them, moving bits around, for a friend of Grete’s. I don’t mind doing it at all, but it’s bloody warm work.

Since Grete got her new machine, we’ve reduced the number powered up overall by one. Her old machine (lothlorien) became the mail/news/web server here. Her new machine (shire) is obviously hers. We decommissioned hoth, which was the old mail/news box. And we’ve also turned off r2d2 which was providing the printer and data shares. Lothlorien (debian) is now providing those, which is nice (and it’s finally working with the tape backup, which wouldn’t work on the previous debian build).