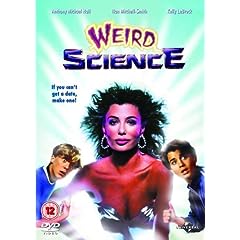 Imagine the year is 1985, Ronald Reagan is starting his second term of office in the US, Coca Cola release New Coke, Live Aid raises £150 million, the Amiga personal computer is launched by Commodore, the NES is released in America, Calvin and Hobbes debuts in 35 news papers and Windows 1.0 is released by Microsoft.

In that year, two nerds steal enough computing power to turn a toy doll into Lisa, spawn a generation of ever hopeful adolescent teens and give a generation of young men a set of images they’ll never forget.

Weird Science is a nerds-come-good comedy written and directed by John Hughes and released in 1985.  Clearly I’ve seen it before, many times, but it’s been a little while since I last saw it and I really wanted to own  copy.  We bought it on DVD recently and watched it last night and I thought I’d let you know how it stood up.  The answer surprisingly is pretty well.  It’s funny, entertaining and charming in its own way.  It’s a teen movie with teen themes and teen quality over-acting.  It’s oddly innocent compared to similar movies of the last five years, but despite that it still manages to be reasonably current (nerds being bullied is a perennial theme I guess).  Watching it these days it’s entirely clear it was filmed in the 80’s, because the hair and shoulder pads probably needed trailers of their own.  It didn’t have the long periods of belly laughing that maybe current comedies can evoke, but it’s entirely possible that’s because I’ve seen it so often.  We certainly did laugh and it certainly entertained us for the entire running time.

At the time it was probably considered terribly risqué, these days next to American Pie and Road Trip it’s totally tame, but the comedy is still there, the story interesting, the pace good and there are some truly funny moments.  Well worth watching again if you’ve not seen it for a long time, and I would encourage anyone who’s never seen it before to give it a go.