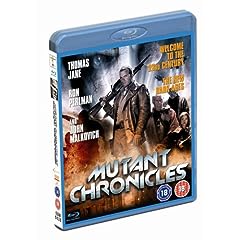 Mutant Chronicles has Ron Perlman in it, so it has to be good right?  Actually it’s got Thomas Jane, Sean Pertwee, John Malkovich and Steve Toussaint, as well as Ron Perlman.  All I knew before renting this on DVD was that I’d seen one trailer which looked half decent, it has Ron Perlman in it and it’s called Mutant Chronicles, it was enough for me!  The film tells the story of a future earth, where four corporations who run the place war constantly for possession of the remaining resources.  It’s got a steampunk edge, and the start shows us the ongoing war, heavy on the World War I trench warfare imagery.  We get a brief introduction to a few characters and a voice over from Ron.  Eons ago a machine was sent to earth, with the sole purpose of subverting humans and turning them into killer mutants.  Inevitably, the war breaks the seal behind which the machine was locked by an order of priests (Ron being the head guy now), and all hell breaks loose in an already hell-ravaged world.  The corporations evacuate to Mars and Ron is left looking for a bunch of soldiers to help him shut down the machine and save those people left behind.  He finally puts his band of heroes together, from all corners of the world, and they head out to save what’s left of earth.

Visually the movie is great, it looks to me like it’s shot using the same technology as Sky Captain and the World of Tomorrow, but the shots are put together better and the technology isn’t so apparent.  The steampunk look and feel works really well and the opening moments in the trenches are suitably depressing and set the scene well.  The story arc is predictable, but the actors manage to keep us interested and there are a few interesting moments in the dialog.  The action scenes are ok, although some of the actors look a little uncomfortable it has to be said.  Anna Walton looked both great and terrible in equal measure which is a real shame, since her character had a chance at having the most depth.  Overall the writing doesn’t give any of the characters much depth, and it certainly betrays the roleplaying game background material.  Despite that, the movie was entertaining enough, and managed to avoid being entirely cheesy.

What I think really let it down overall was the pacing and editing.  The introduction was just too long and didn’t offer any character depth, the middle section in which the band of heroes is put together and descend into the catacombs is just too short, some of the heroes die within the first moments of setting out, with barely a line of dialog.  The end is ok, but feels bloated compared to the introduction.  There are odd threads which feel like they’re part of a greater movie but don’t really fit in.  Near the end we see Jane ‘saving’ Pertwee’s character, who is taken captive at the start of the film.  But where has he been?  The section where he saves him is either wasted space, or an excuse to keep Jane alive during an encounter which sees many of the heroes die.  Pertwee brings his character to life more than anyone else in the movie and it was a shame to see him used to little throughout.

Generally Mutant Chronicles is ok, but could have been much better.  I wonder if the best movie is on the cutting room floor or still on the storyboards, and maybe a more confident director would have delivered a more cohesive action adventure.