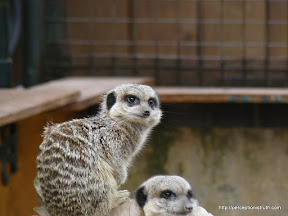 While we were on holiday I promised Grete we’d go to the zoo.  We’ve been to Twycross a few times and we fancied a change.  I don’t know if you’ve seen Zoo Days on the TV but it has Chester zoo and we’d thought we’d give that a shot, it’s only a couple of hours from here.  We planned to go yesterday but the weather first thing was enough to put us off – however bright skies this morning had us heading over there at 9:20am.

Chester zoo is massive, there is no way you can see everything for any useful duration in one day.  We walked from 11:30am until it closed at 4:30pm with a short break and saw about 60% of the enclosures, and a few of them for only a few minutes in passing.  I am really impressed by the size and quality of those enclosures though.  There is a lot of moving water at Chester, many of the enclosures have streams or waterfalls or some kind of moving water.  Where possible they’ve used live plants and trees, for example the chimpanzee enclosure has a little wooded area in the middle and they were hanging out there away from the wind.  I’m used to see lots of man-made structures and there were certainly some of those but it was nice to see the animals being able to use live vegetation.

We caught the sea lion talk, which I have to say was a little disappointing.  I had visions of the keepers feeding both sea lions and making them wave to the crowd or collect rubbish or something, but instead they fed the male one (huge thing!) off to the side and got the young female out of the water a couple of times.  The penguin talk was good though, with them throwing fish into the water and the penguins fighting off the seagulls who came to snack.

In some ways, it’s always going to be a little sad looking at a lion through a fence, instead of in the wild, but I just have to hope the zoo is doing some good in terms of conservation and breeding to make it worthwhile.  A lady next to us said the lions must get so bored – but I’ve got two cats, and I’m pretty sure the lions are happy enough sleeping, eating and roaring at visitors who annoy them.

The food we grabbed at lunchtime was over priced, I know in advance it’s going to be over priced, but it doesn’t make it any less surprising.  I just kept telling myself they use it to pay for the animals, and that if I was less lazy and more prepared we could have taken sandwiches.  Overall the day out was quite expensive, but I think the animals make up for it.  Chester’s huge and interesting and I just wish we’d had more time.

See the photo’s over here.