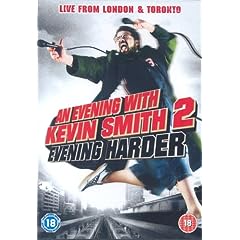 We finished watching the second Kevin Smith Q&A DVD today (I wrote about the first one here).  This time Kevin is in Canada and Britain with the first DVD covering Canada and the second the UK.  The Canadian Q&A is really good, very funny.  The British one is ok, but I didn’t find Kevin as on-form as he seems in Canada.  Maybe the English accents sound weird to me (you don’t often hear natural English access alongside American ones), maybe I just got annoyed by some of the dumb ass British questions.

Either way, the DVD was still excellent and well worth watching for any Kevin Smith fans.  It’s not quite as revealing as the first one though, so it’s probably for pure fans of Kevin, rather than just for entertainment.

The questions cover the whole range once again, and Kevin is candid and open about his life, his wife and his mother.  I learned a couple of things I never knew about Kevin (and that his wife appeared in Playboy, Kevin took the photo’s), and found it really easy to listen to him.  Jason Mewes seemed as out of place as ever, and although sometimes he managed to answer a question he mostly looked like he wanted to be somewhere else.

Kevin is clearly a superb orator, although you have to be prepared for about a 77% hit rate on profanity, and when he has a decent story to tell it’s very entertaining.