Took these photo’s on a narrowboat holiday in 1988 sometime in the mid-to-late 80’s.  I think we started near Leek and went through Stoke on Trent and down to Stratford, but we may have gone north to Manchester, I can’t remember.  And yeh, I took a pretty shoddy photo even in those days, I didn’t get any better either. 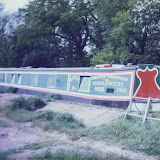 And no, I’m not in any of the photographs, sorry.

Edit: The more I think about this the more I think it must have been earlier than 88?  The photo’s are still in their original packet, which is clearly marked 1988.  But I wonder how long I had the film before getting it developed.  I left school in 1989 after two years in the sixth form, which would mean I started sixth form in September 1987.  I’m 99% sure I went on this holiday long before sixth form, which would mean either early ’87 or even maybe ’86 but I can’t explain why the date on the photo packet is so out unless it’s from a different set of photo’s?